Mom Tameka Diaz followed her gut that something was off with her daughter Evely (and had suspicions confirmed) not once, not twice, but three times! In each instance, she faced resistance of medical professionals and felt like she was on trial to prove that her daughter deserved tests and screens. The first time, Evely’s profound heart failure was discovered. The second time, Evely received a sleep study after much resistance, and found she had severe sleep apnea and required surgeries and machines to help her breathe at night. And most recently, they found epilepsy after another round of fighting doctors to give her daughter the tests to look into her concerns.

Because of these experiences, Tameka is passionate in empowering other parents to follow our gut and never stop fighting for them. In this episode, she shares each of these three experiences and gives us advice on fighting for our own medically-complex children. She also speaks to the emotional breaking point she hit from all the stress and the necessity for caring for ourselves, too.

Tameka is passionate about empowering parents to follow our guts when it comes to our children’s health—and it’s not hard to see why.

When her daughter Evely was only a few months old, she was acting “off”. Tameka noticed how irritable she was and a few other unalarming things that her doctors shrugged off or attributed to her blindness. But even after been dismissed several times, Tameka knew she had to try again.

They had taken their small family to the coast to decompress from a stressful first few months. When they arrived at their destination, Tameka called Evely’s pediatrician after-hours and told him that she simply would not be able to relax until answers could be found about her baby.

He told her to head to the nearest hospital for testing.

As they headed to the hospital, the mood was somber. Not even 24 hours into their trip, Tameka remembers warning her husband that they would not return. She was certain whatever her baby required would be intense.

Sure enough, scans and testing revealed advanced heart failure. Evely was on death’s door and none of the traditional symptoms manifested. But Tameka followed her gut and kept fighting for answers and was able to give her the lifesaving treatment she desperately needed. She never forgot how important our role is as our children’s advocate.

She told me simply,

How empowering! We have such vital roles in our children’s lives and development. It’s been easy for me to feel minimized in that role as Kimball’s mother with so many others on the team, but as time has gone on, I have recognized the irreplaceable role I have as a nurturing mother.

Tameka went on to say:

“We need medical doctors, but nobody knows our babies better than we know our babies. And we don't need a medical degree for that.”

Yes! We certainly need each other to create a whole and complete team on behalf for our children. But the system is far from perfect.

Tameka—and the rest of us—should never have to fight and plea and beg for scans and testing. As she intensely pointed out, when we ask for help getting to the bottom of an issue we have found, they should absolutely assist us without a fight.

Over the ensuing five years after finding Evely’s heart failure, Tameka faces similar resistance to testing that led to the discovery of severe sleep apnea, and most recently, epilepsy.

Of those experiences, she remarked:

“It feels like you're on trial and having to prove why your child deserves to receive adequate care.”

And that is absolutely not okay.

After finding these dangerous and intense medical issues, Tameka understandably feels a huge weight to be vigilant in looking for “the next thing.”

And she’s tired. She’s so tired from advocating and fighting for her daughter endlessly. She advises us to never lose sight of our “why”—our deserving and perfect children. She taught:

Tameka does just that—she holds onto her fierce love for her daughter whilst advocating for and giving the best possible to her. But we also talked about the vitalness of self-care in this equation.

Last year, she went into the doctor for severe chest pain in herself. After examination, they found her chest walls to be inflamed. The attributed cause? Stress.

In all the fighting for and care for, we absolutely cannot forget to care for ourselves. When we treat it as optional, we will find negative effects as she did.

She has found success in caring for herself as she celebrates what she calls her “medical-mama inchstones.” As she pointed out, we so often celebrate our children’s inchstones, but what about ours? Battling intense separation anxiety from Evely, she openly celebrated an overnighter she took away from her, recently, to perform in a musical group out of town—something she used to do as an occupation.

Celebrating these small wins is so key to remembering how important they are to our health and our ability to give our children the version of ourselves they deserve.

So, as Tameka so wisely teaches us in the episode, never forget to follow your gut, remember your “why”, and celebrate your medical-mama inchstones. 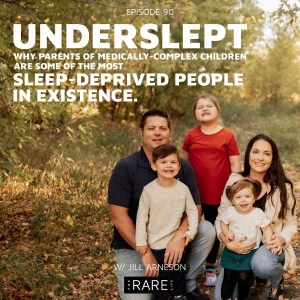